"Fair Chance" policies and laws, designed to expand opportunities for those who've been through the criminal justice system, have grown in popularity nationwide in recent years. Many states now "ban the box" on job applications that asks about criminal convictions. There is even a federal Fair Chance Act that applies these principles to hiring for positions within the government.

Though these changes have been sweeping, they haven't reached every state, county, or city. Likewise, criminal background checks remain an important part of the hiring process. In some places, this combination of facts means an entrenched status quo where otherwise qualified candidates might find themselves turned away as unsuitable. Employers may worry about the impact of their actions on the business, or they may worry about the comfort level of existing staff.

However, a new survey commissioned by the job search website Indeed, reveals some interesting trends with significant takeaways for employers.

To begin, an overwhelming 92% of survey respondents said they would have no problem working with someone whose past contained a nonviolent criminal offense. Multiple offenses only dropped that number to 67%, and although the recentness of the offense had some impact on personal feelings, the point is clear. There are many scenarios where employees are content to live and let live without affecting how they feel about their coworkers.

Surprisingly, that two-thirds number holds when the question was changed to ask about a single violent felony. 66% still said they would be comfortable, with the number dropping just 12% to a 54% rate of comfort if a coworker had multiple violent crimes in the past. While that is not a green light to hire everyone, it does indicate that employers may wish to expand their pool of candidates to identify more well-qualified individuals, even those with troubled pasts.

Making such a change can positively impact employers because it raises the chance of finding the ideal candidate for a position. According to the Indeed survey, 73% of respondents said they would prefer to work for a business that believed in fair chance employment. The same amount of people said that criminal history questions on applications should be abolished, mirroring broad nationwide support for ban the box law campaigns.

The takeaway is clear: embracing fair chance principles can make your business more appealing to job seekers attract additional talent and without negatively impacting workplace morale. However, explicit or not, many companies don't seem eager to advertise such policies. Barely 2% of job postings on Indeed advertise that they come from Fair Chance employers.

Ultimately, how a business chooses to advertise jobs and conduct its hiring is a matter of choice and preference. Nonetheless, the new Indeed survey reveals that commonly held beliefs about employees with prior convictions may not have a basis in reality. Instead, companies have an opportunity to make a positive contribution to their community while reaping the benefits of higher-quality labor.

About Michael Klazema The author

Michael Klazema is Chief Marketing Technologist at EY-VODW.com and has over two decades of experience in digital consulting, online product management, and technology innovation. He is the lead author and editor for Dallas-based backgroundchecks.com with a focus on human resource and employment screening developments. 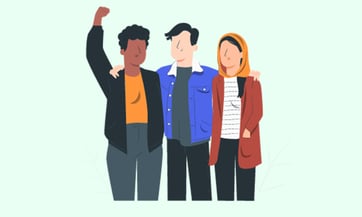 For incarcerated individuals, the day of release often feels like a rebirth, the opportunity to start fresh again. The j...

The Fair Chance Act: What You Need to Know

Ban the box legislation isn’t new, but it has so far been limited to smaller geographical areas or governmental units. T...

Are Applicants Background Checking Your Business?

How Biden's Executive Action on Marijuana Might Impact Employment